Written by: sbnadmin This entry was posted on Friday, August 11th, 2017 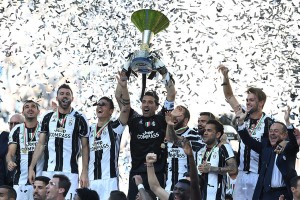 Next weekend, all eyes will be on Italy as one of the world’s biggest soccer leagues, the Serie A returns for its 116th edition. Top bookmakers have listed Juventus as the odds-on favorite to win the Serie A crown this season. That being said, you can never count out top Italian sides AS Roma and Napoli from ending their respective title droughts this campaign.

Read on below to find out more about the favorites for the upcoming 2017-18 Serie A season. While you’re at it, you can also check out our sportsbook review section to determine which sportsbooks provide the best soccer betting opportunities.

The Grand Old Lady of Italian football flexed their might in the domestic scene last season, winning the league and cup double for the third year running. Juventus stormed to their sixth straight Serie A title, winning the league by four points. There’s so much uncertainty, though, with regards to Juventus’ title-retention bid this season as some of their key players departed this past summer.

They sold defensive stalwart Leonardo Bonucci to rivals AC Milan while Brazilian Daniel Alves ended his highly-successful spell in Turin by joining Paris Saint-Germain a free transfer. To soften the blow of those departures, Juventus signed Mehdi Benatia and Douglas Costa from Bayern Munich. They also signed Juan Cuadrado and Rodrigo Bentancur to add more firepower to their offensive ranks. Even with the change in personnel, bookmakers have listed Juventus as -175 favorites to win the Serie A title this season.

Juventus may be the odds-on favorite to win the title this season but we can never rule out Napoli from making a run at the championship this year. Napoli came close to winning the Serie A trophy last season, finishing just five points behind champions Juventus. To help bridge that gap, Napoli signed center back Nikola Maksimovic this past offseason. The ex-Torino man will help boost a Napoli defense that surrendered 39 goals in the league last season. They are pegged at +500 to win the crown this season.

It has been 16 years since AS Roma last won the Serie A title and new manager Eusebio Di Francesco is confident that this will be the season where they will finally end their long title drought. To compensate for the departures of superstars Mohamed Salah and Antonio Rudiger, the Giallorossi signed Rick Karsdorp, Cengiz Ünder, Bruno Peres, Lorenzo Pellegrini and Juan Jesus this past offseason. Those moves will help strengthen a Roma side that finished second in the league last season with 87 points. They are priced at +800 to lift the Serie A title this campaign.

Create an account now with our favorite Serie A Futures sportsbook and make your pick on who you think will capture the Serie A title this season.