Who Will Win the 2017-18 German Bundesliga Title? Sportsbooks List Odds on Early Favorites

Written by: sbnadmin This entry was posted on Friday, August 11th, 2017 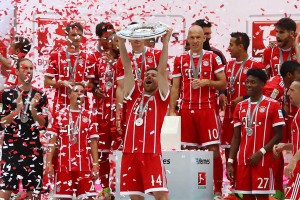 The long wait is finally over! German soccer action returns with a bang this week with the start of the Bundesliga. All eyes will definitely be on defending champions Bayern Munich as they look to capture their sixth consecutive league crown.

In fact, top sportsbooks such as TopBet and Pinnacle have listed Bayern as the favorites to once again to win the title this campaign. Read on below to find out more about the favorites for this season’s German Bundesliga. While you’re at it, you can browse through our sportsbook review section to find out which sportsbooks provide the best betting opportunities for the new soccer season.

Sportsbooks seem to be in agreement that it would take something catastrophic for Bayern Munich not to win the German league this season. The Bavarian outfit was simply unstoppable in last year’s competition, winning the Bundesliga by a whopping 15 points. It was Bayern’s fifth consecutive championship in the German league and their 27th overall.

If that wasn’t enough, the European giants decided to further strengthen their title-winning squad this campaign. Not only did they sign central midfielder Corentin Tolisso from Lyon, Bayern also managed to snag James Rodriguez from Real Madrid in a high-profile loan deal. Bayern Munich are the odds-on favorites at -700 to win the Bundesliga this season.

Borussia Dortmund will look to bounce back strongly this year after a disappointing finish in the league last season. They finished in third place in the Bundesliga last campaign, scoring a measly 64 points. That was still enough though for them, however, to nab a Champions League place this season. For Dortmund to maintain a strong title charge this season, they will need Pierre-Emerick Aubameyang to continue his excellent play. The Gabon international scored 31 league goals in 32 games last season. Dortmund are priced at +700 to win the Bundesliga this campaign.

By virtue of their runner-up showing last season, RB Leipzig have been installed as third-favorites at +2,200 to lift the Bundesliga crown this campaign. Leading the way for Leipzig last season was Timo Werner. The 21-year-old forward lit up the Bundesliga last season, scoring a whopping 21 goals for the German club. He was the league’s fourth-top scorer last season. To further boost their title credentials this year, Leipzig have decided to sign forward Jean-Kévin Augustin and left-winger Bruma. They will help strengthen a Leipzig attack that scored 66 goals in the German Bundesliga last season.

Create an account now with our favorite German Bundesliga Futures sportsbook and take a punt at who you think will win the 2017-18 Bundesliga title.